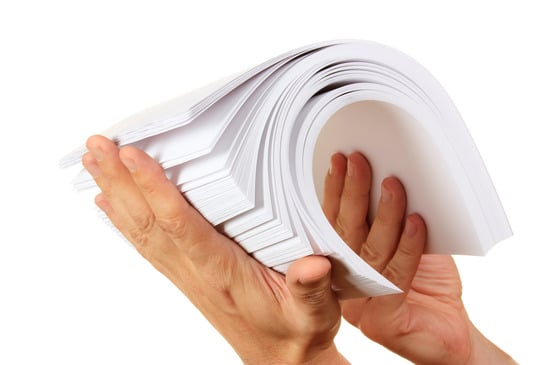 Although today most of us send all of our writing digitally through E-Mail, written on a word processor, paper is still an extremely important part of the world. Storing off-machine back-ups is one of the most important reasons that paper is still used, for example.

However, paper has been in circulation for hundreds of years. From the shabby tomes that have been found across time to the leather bound novels that we can buy today in stores, paper still serves an incredible purpose to man.

But when did paper become the style it was today? When did it move away from being shaven wood or tea-stained scribbling’s sent via an eagle?

There has been a widespread, international standardization for paper for many years now. However, beforehand the world had a huge variety of different standardizations which made the easy transport and delivery of paper in different countries very difficult indeed.

The current standard, the ISO standard, compromises of you’re A, B and C classes. The paper size of course affects what you will be doing – A4 makes up your general writing paper or letterhead, whereas A1 is the largest and can be used for designing placards or used as a basis for a large plan.

The constant changing and arguing between nations about what standard to use eventually led to the creation of the ISO standard. The first advantages of having a standardized paper use was noticed in 1786 by Georg Christoph Lichtenberg. Lichtenberg, sending a letter to Johann Beckmann, created formats which made up the modern-day A2, A3, B3, B4 and B5 paper sizes. However, they were forgotten as the French Revolution was underway and many parts of French culture were lost or destroyed.

The main reason the standard was used for the ease of which is could be scaled – an A1 sheet can be folded down many times to make up a huge pamphlet or brochure. A5 sheets can be folded down to make a small letter, for example. The idea is that when folded in half, the size of paper will then reflect the size below i.e. an A1 sheet folded in half will represent an A2 sheet.

There are/were variations of the paper standard in countries like Sweden and Germany. The German standard known as DIN 476 made up the original A & B sizes, but it also had larger formats the largest of which was 4A0, which was four times the size of an A0 page. The Swedish, in contrast, added a D,E,F and G standard to the original A,B, C format.

However, both countries will use the ISO format as it is the natural standard. Even though so many messages are sent electronically today, the practicality and refinement of a paper document cannot really be matched and it adds an almost finalized feel to things. Without standards, however, we may have moved away from paper many years ago.

Latest from the blog